Wondering What to Do with Your Eclipse Glasses?

Despite how scarce eclipse glasses seemed to be, millions of them were produced and sold in advance of the Great American Eclipse on August 21st. One leading manufacturer had produced 37 million by the end of July with the goal of making 100 million (1). That represents a whole lot of resources to view that natural marvel.  If you were fortunate enough to snag a pair of eclipse glasses and view the solar eclipse, you may be wondering what to do with those special spectacles now that the big event is over. 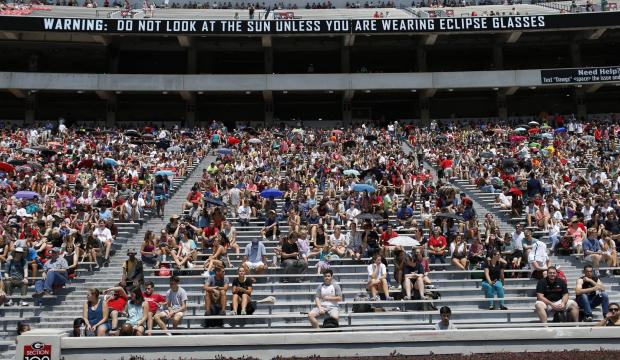 More than 20,000 people viewed the eclipse at a Samford University’s stadium in Georgia.

According to NASA, you could hold onto your glasses for the next solar eclipse to cross the U.S. on April 8th, 2024 – with a few caveats. NASA states that ISO 12312-2 safety standard certified glasses can be used indefinitely so long as “the filters aren’t scratched, punctured, or torn”. Warnings on glasses stating they expire after 3 years are outdated. So, carefully pack those babies away somewhere safe for the next 7 years.

Option 2: Donate Them (for reuse)

If seven years is too long or you don’t consider yourself that organized, consider donating your eclipse glasses instead. Astronomers without Borders and Explore Scientific are collecting glasses to be used by school children in South America and Africa for the 2019 solar eclipse.  Glasses can be mailed to them at the address below or you can look for a local collection site near you with their interactive map. It continues to add collection locations as organizations sign up. As of this writing, there are a few locations collecting in DuPage County, including Itasca County Club, Fullersburg Woods in Oak Brook and Main Street Candy and Toys in Elmhurst.

If the film on your paper eclipse glasses is wrinkled or damaged or you got stuck with a counterfeit pair, you can take steps to avoid sending your entire spectacles to a landfill. The glasses as a whole are not recyclable but you can easily demanufacture them. Simply rip them open and pull out the plastic film as shown here. Recycle the paper in your bin at home and toss the film in the trash (we did not have any luck finding anyone accepting the film for recycling). 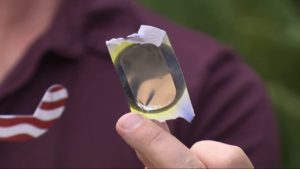 Pull out the lenses before recycling the paper frames.

Didn’t manage to get yourself a pair of eclipse glasses? Well, you’ve got advance notice for the 2024 eclipse. If eclipse chasing has become your thing, consider investing in a more durable pair of eclipse glasses or viewers to cut down on resources long term. You could also consider buying one pair and sharing them amongst a few friends or family members to cut down on waste. A zero-waste (and ultra-last minute) tip from Neil DeGrasse Tyson? Pull out a spaghetti colander for a no-waste (multi-use) pinhole viewer.

Note: Eclipse viewing is always at your own risk. Individuals are responsible for assessing the quality of their eclipse viewing glasses.