Key topics and vocabulary words for the classroom will be in bold.

Everybody poops! Including whales; in fact, their poop contains high levels of iron – an element that is typically scarce in ocean surface waters but is a critical nutrient for phytoplankton and other microorganisms  that make up the foundation of the oceanic food pyramid. The topic of whale poop can be woven throughout many different science lessons for classrooms of all ages. It can be as complicated as carbon sequestration and pelagic zones or as simple as species identification and food webs. Not only is whale poop, or flocculant fecal plumes, a multifaceted topic, it is also sure to catch the attention, and perhaps some giggles, from kindergartners to seniors in high school.

Recent research has found that whales play a critical role in carbon sequestration, and as a result, can help slow the impacts of climate change. Some coastal countries with whale populations may even start to factor in the amount of carbon sequestered by whales in pursuit of goals set by the Paris Agreement in 2016. But with whale populations dwindling due largely to ocean acidification, depletion of their food sources, and previous industrial whaling, the conservation and restoration of whale populations around the world is critical. There are many eco-tourism industries that rely on whale watching, and now, the earth’s climate. 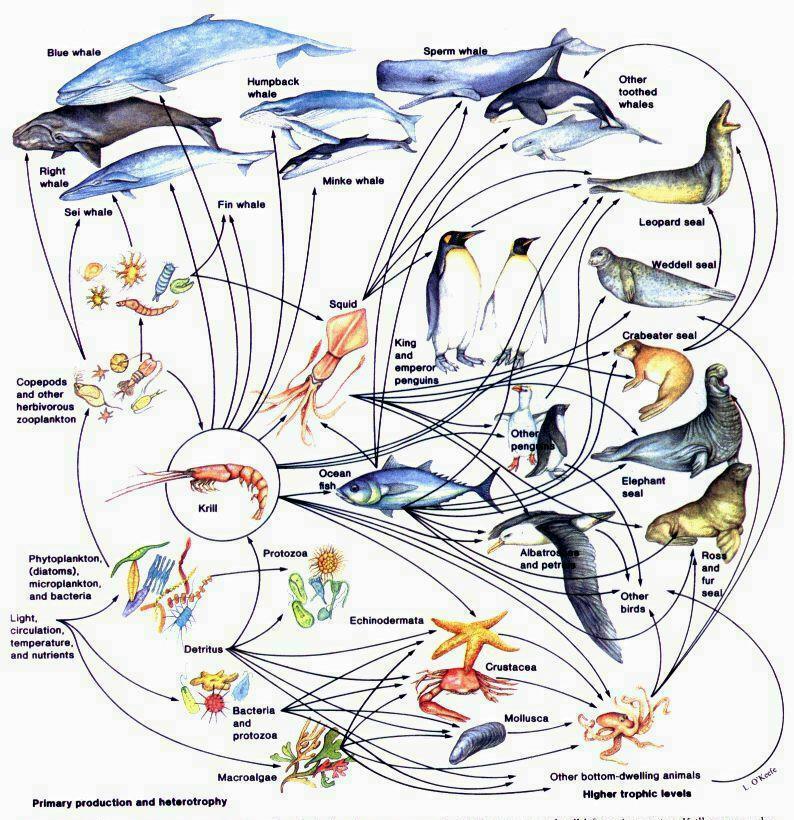 Baleen and toothed whales play a unique role in oceanic trophic cascades and food webs. These whales dive to deep levels, sometimes up to 3,000 feet to feed on krill and other small food sources. When they return to the surface, the water pressure is greatly reduced and they release fecal plumes, or poop. Their diets are rich in Krill; a small shrimp-like creature in the crustacean family who feed solely on phytoplankton in the ocean’s epipelagic (sunlight) zone at night but return to the mesopelagic (twilight) or bathypelagic (midnight) zones during the day. Krill are a bright orange color due to their high levels of iron (Fe). As a result, whale’s fecal plumes are rich in iron and when released, float to the surface where phytoplankton and other microorganisms can use these nutrients. It is estimated that a single sperm whale brings about 50 tons of iron to the ocean’s surface each year. Phytoplankton, like terrestrial primary producers, sequester carbon while providing food for secondary consumers like krill. This process forms a cycle, or what’s better known as a whale pump. 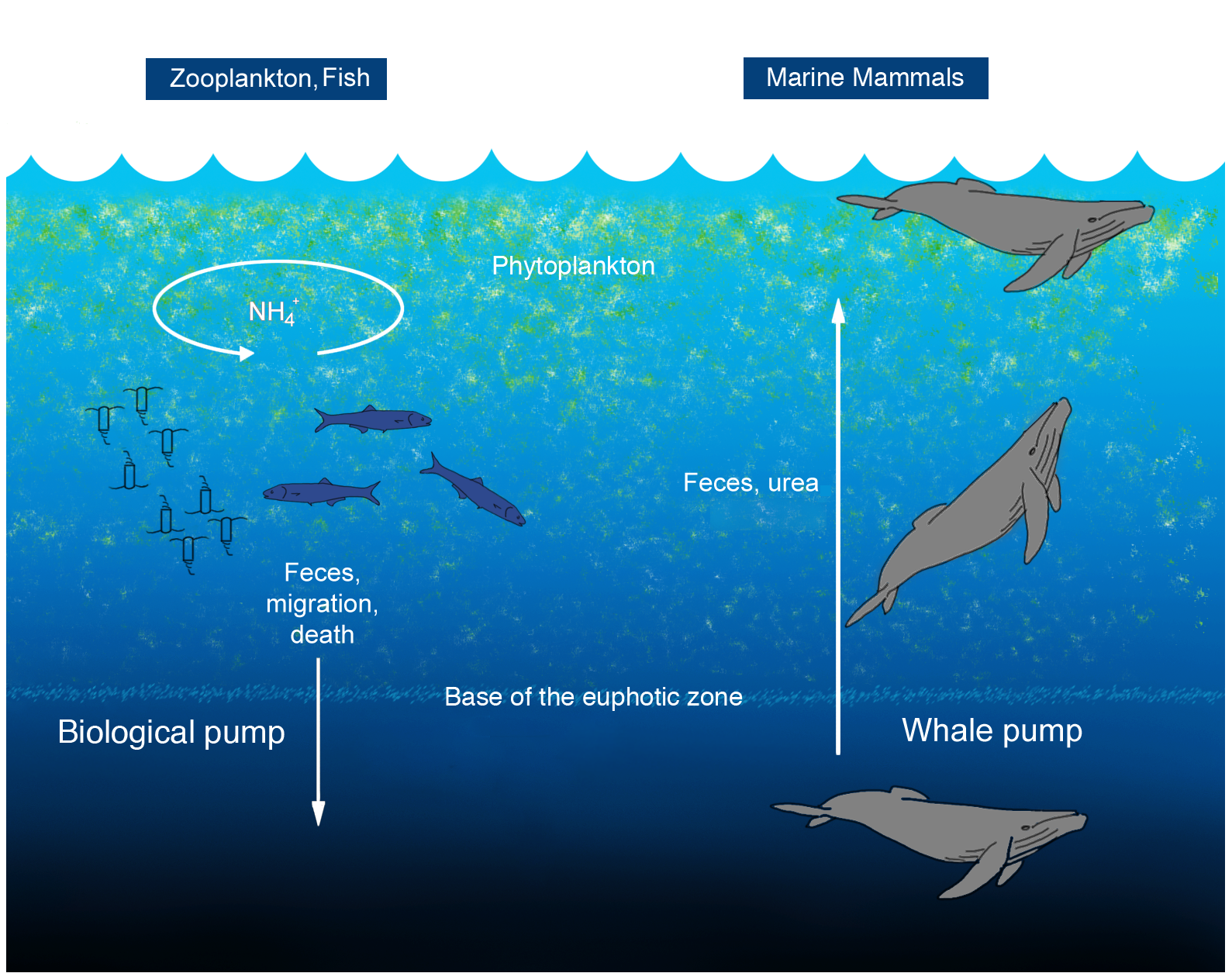 Whale pumps bring nutrients from deeper ocean waters up to the surface, effectively fertilizing the top layers of the ocean and propping up the base of the oceanic food pyramid. Without specific nutrients like iron and cobalt, these essential primary producers are unable to reproduce to both provide food for higher trophic levels and compete with aggressive algal blooms that result in dead zones. Dead zones are often caused by nutrient loading, or the deposit of excess farmland fertilizers (primarily nitrogen and phosphorous) into the ocean allowing the proliferation of algae, and consequently, the consumption of all dissolved oxygen needed by other species.

So what does all of this whale poop have to do with climate change? Preliminary estimates predict that a population of 12,000 sperm whales can sequester 200 thousand tons of carbon annually – that’s equivalent to about 70 thousand vehicles traveling 15 thousand kilometers per year. The process of iron fertilization, or the introduction of iron into iron-poor areas of ocean surface waters intends to stimulate phytoplankton production and subsequently enhance biological productivity and accelerate carbon sequestration. This process is done naturally through whale pumps, but is also being considered as manmade intervention to slow the human-driven acceleration of climate change. Phytoplankton and other microorganisms are huge carbon sinks and iron is the catalyst they need to continue sequestering carbon and providing other ecosystem services, many we may not even be aware of yet. Whales hold the key to many of our problems with climate change and biodiversity. The multifaceted role whales play in global ecosystems show just how interconnected food webs, trophic cascades, and the ecosystems of the world are. The “save the whales” movement is more than just saving a charismatic species in danger, the impacts of whale protection and population restoration are numerous and far-reaching. May we see the day when whale populations attain value through carbon credits? 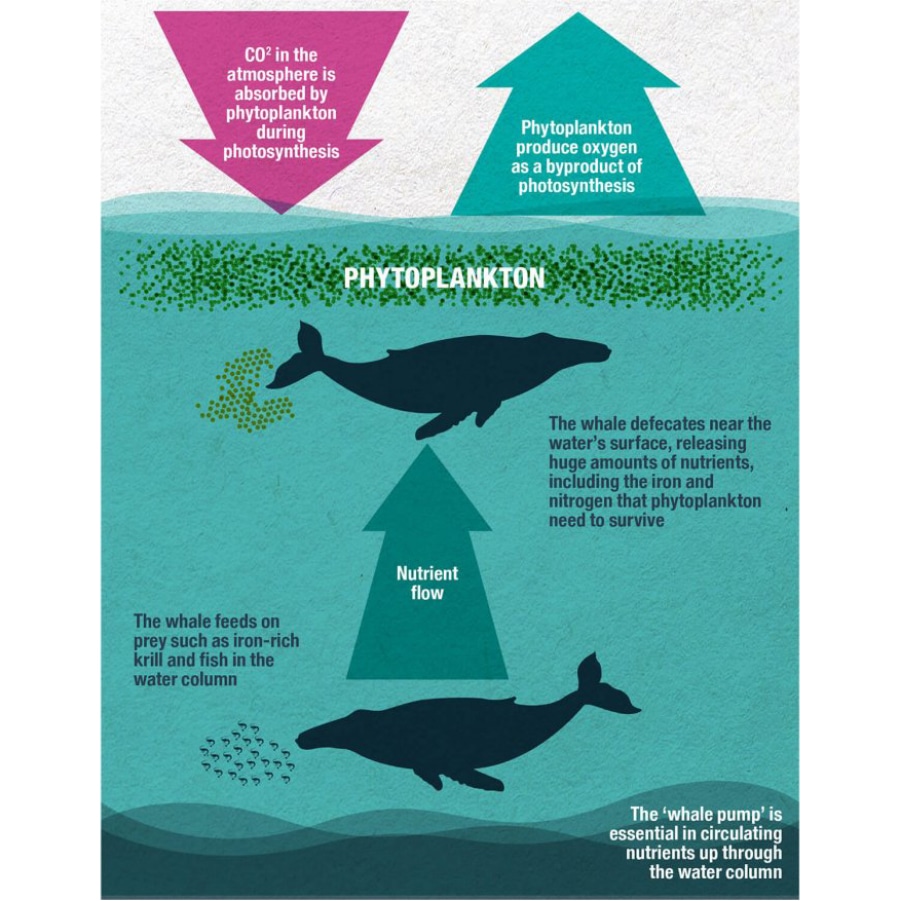