Is Your Driveway Toxic? What to Know Before You Seal 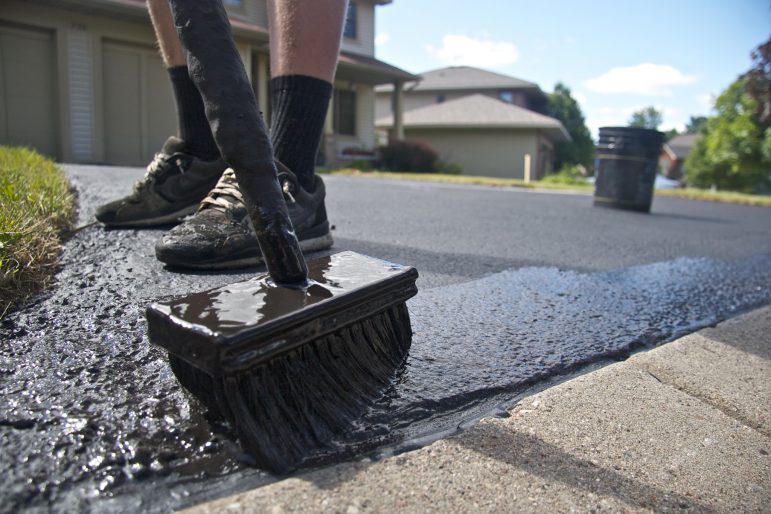 Re-sealing your asphalt driveway is an important step to make it last longer. Making things last as long as possible is a cornerstone to conserving resources. But when you re-seal your driveway are you slicking it with a toxic product?

If you are using a coal-tar based sealant then the answer is a resounding “yes”!

The Problems with Coal Tar

Coal-Tar based sealcoat is a major source of Polycyclic Aromatic Hydrocarbons (PAHs) in the environment.  PAHs are a big concern as many cause cancer, mutations, birth defects, or death in wildlife. Further, sunlight can intensify the potency of several PAHs.

PAHs are released into the air above a sealed surface as well as worn away in dust that can be tracked into homes and washed into local waterways. The risk of cancer is 38 times higher for people living adjacent to coal-tar sealed surfaces. Most of that additional risk comes from exposure as a child. Children are particularly at risk as they spend more time playing on the floor or outdoors on or near sealed surfaces.

Permeable pavers do not require sealing and help absorb and filter rainwater.

A good substitute is asphalt-based sealcoat.  Though not 100% PAH-free, it has about a 1000 times lower concentration than that of coal-tar based sealants.  A number of chains, including, Ace Hardware, Lowe’s and Home Depot have stopped selling coal-tar based products. Whether you are sealing your driveway yourself, or having it done by a professional, be sure to use a product without coal tar.

You can also consider an alternative to asphalt pavement that doesn’t require regular sealing such as concrete, permeable pavers, or permeable asphalt. Permeable pavers and permeable asphalts offer the benefit of absorbing and filtering stormwater to further reduce PAHs that may be present in runoff. Planting rain gardens and bioswales to absorb and filter run-off are a great partner strategy to reducing contamination of local water bodies.

Due to the increasing body of evidence, states and municipalities have implemented bans on coal-tar sealants. Austin, Texas was the first city to pass a ban back in 2005. Bans and voluntary restrictions have begun popping up in the Great Lakes region. The state of Minnesota and the City of Milwaukee have both approved complete bans.

In Illinois, South Barrington was the first town to tackle coal-tar. A number of DuPage County governments have agreed to voluntary stop use of coal tar on their property. Schools are taking action, too. Villa Park School District 45 and Wilmette District 39 have banned the use of coal-tar on district property to protect their students’ health.

Do you want your school or town to be next? Talk to your local school board, state or federal representative and tell them to take action against toxic coal tar.

Coal-Tar Sealcoat: a Major Source of PAHs to Air and to Children Living Nearby – USGS 2012