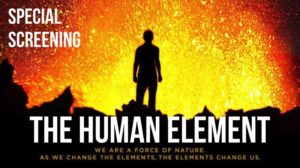 Join the Waubonsee Community College during the One Earth Film Festival for this free showing of The Human Element.

Renowned photographer James Balog (prominently featured in “Chasing Ice”) uses his camera to reveal how environmental change is affecting the lives of everyday Americans. Following the four classical elements—air, earth, fire and water—to frame his journey, Balog explores wildfires, hurricanes, sea level rise, coal mining, and the changes in the air we breathe. He takes it further by examining the effects of the fifth element—the human element—to tell an urgent story while giving inspiration for a more balanced relationship between humanity and nature.