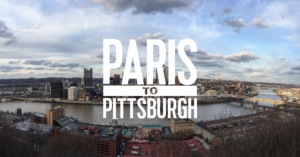 Join the Elmhurst College during the One Earth Film Festival for this free showing of From Paris to Pittsburgh.

The Paris Agreement was monumental in uniting all nations in the fight against climate change. With the United States’ withdrawal from the agreement, citizens around the country are taking matters into their own hands. “Paris to Pittsburgh” explores the very real social and economic impacts of climate change-fueled disasters and features voices from local leaders and everyday Americans from Pittsburgh to Puerto Rico.